To my family, although there were no commandments of religion, food became something we worshiped. Food got you through the winters and food brought families together in the spring. Food is everything we need to survive and we, like all other Chinese people we knew, marked all occasions with food.

I can still remember many of our dinner table conversations:

“Jin, finish your bowl of rice.”

“But why, there are only a few grains of rice left; and I can’t get them with my chopsticks. I’m full.”

I would then get a smack on the back of my head and I would know everyone in the room was staring at the few grains of rice left in a clearly empty bowl.


“Every grain of rice is the fruit of someone’s labor. If you waste any of it, you are disrespecting those men and women who slaved their whole year just to bring you this food.”

I was too young to argue and being considered disrespectful in Chinese culture is worst than being called a racist in America.

I would lower my head in shame and pick up the few drops of rice with my fingers, place them on my tongue, and mash them against my teeth to taste the sweetness. Yes, if you savor a grain of rice long enough, you would taste a very distinct sweetness.

Someone would then remind me of a poem I had to memorize.

“Don’t you think you ought to recite that poem again Jin? The one about farmers and rice? Maybe if you recite it enough times, you would remember the importance of a grain of rice left at the bottom of your bowl.”

I would lower my head in shame even further; my fingers grasping the edge of the table and my chin resting on my knuckles.

The poem is about Chinese farmers who work in the hot sun just to get enough food for their family and usually don’t have enough to sell to make profit.

Hoeing seedlings in the noonday sun,
Sweat drips to the earth below.
Who stops to think about the food on our plates?
Every single grain is the fruit of hard work.

When I first moved to the US, I was shocked to see how much food Americans wasted. I would go to dinner at a friend's house to see leftovers tossed into the sink's disposal. I would visit a restaurant to see plates half-eaten and discarded into plastic bags and carried out to the foul smelling back side of the house.

I couldn't understand why Americans did not associate this waste with their hard working farmers. I had terrible thoughts about farmers crying in their fields, tears endlessly dripping over the grains of corn and rice lost.

Then I got to visit a farm, my guilt is eased. I realized American farmers don't actually sweat over the earth below, nor do they plow the field under the noonday sun. The grains of rice became just a small part of a bountiful harvest. Wasting a little is not such a big deal. 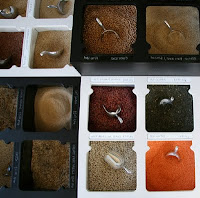 A few days ago a friend send me to a link about a Zero-Packaging Grocery Store to Open in Austin, Texas.

I got to thinking about how I grew up and what food meant to me. I never associated rice with some pretty bag that had a picture of a panda on the front. Rice is rice, tiny, yellowish, brown, or white; it is sweet if you savor it - like sugar. My mother and I would visit the market each day, we would buy enough rice to make for the night and have some leftovers for the next day. We always brought out own baskets and bags, and we took what we needed. I ate ever drop of rice that was cooked.

These days, I visit the store once a few weeks. I buy a bag of rice marked with import labels and inspection approvals from difference languages. We cook the rice and we eat them for a few days. I no longer care about the few grains of rice at the end of a meal. They would go through the sink and end up as part of the biomass density in our water along side of other wastes.

These days, I long for a corner street market where I can walk to, buy a few things for the day, and make fresh food. But I have a over-sized refrigerator and I guess that compels me to utilize all of its chemical wonders.

These days, I can hardly recite the poem without checking if I had remembered it correctly. I no longer rest my head on my knuckles in shame and I freely toss what is not eaten to rot.


In the line at the store, the cashier told the older woman that she should bring her own grocery bag because plastic bags weren't good for the environment.

The woman apologized to him and explained, "We didn't have the green thing back in my day."

The clerk responded, "That's our problem today. The former generation did not care enough to save our environment."

He was right, that generation didn't have the green thing in its day.

Back then, they returned their milk bottles, soda bottles and beer bottles to the store. The store sent them back to the plant to be washed and sterilized and refilled, so it could use the same bottles over and over. So they really were recycled.

But they didn't have the green thing back in that customer's day.

In her day, they walked up stairs, because they didn't have an escalator in every store and office building. They walked to the grocery store and didn't climb into a 300-horsepower machine every
time they had to go two blocks.

But she was right. They didn't have the green thing in her day.

Back then, they washed the baby's diapers because they didn't have the throw-away kind. They dried clothes on a line, not in an energy gobbling machine burning up 220 volts - wind and solar power really did dry the clothes. Kids got hand-me-down clothes from their brothers or sisters, not always brand-new clothing.

But that old lady is right, they didn't have the green thing back in her day.

Back then, they had one TV, or radio, in the house - not a TV in every room. And the TV had a small screen the size of a handkerchief, not a screen the size of the state of Montana. In the kitchen, they blended and stirred by hand because they didn't have electric machines to do everything for you.

When they packaged a fragile item to send in the mail, they used a wadded up old newspaper to cushion it, not Styrofoam or plastic bubble wrap.

Back then, they didn't fire up an engine and burn gasoline just to cut the lawn. They used a push mower that ran on human power. They exercised by working so they didn't need to go to a health club to run on treadmills that operate on electricity.

But she's right, they didn't have the green thing back then.

They drank from a fountain when they were thirsty instead of using a cup or a plastic bottle every time they had a drink of water. They refilled their writing pens with ink instead of buying a new pen, and they replaced the razor blades in a razor instead of throwing away the whole razor just because the blade got dull.

But they didn't have the green thing back then.

Back then, people took the streetcar or a bus and kids rode their bikes to school or rode the school bus instead of turning their moms into a 24-hour taxi service. They had one electrical outlet in a room, not an entire bank of sockets to power a dozen appliances. And they didn't need a computerized gadget to receive a signal beamed from satellites 2,000 miles out in space in order to find the nearest pizza joint.

But isn't it sad the current generation laments how wasteful the old folks were just because they didn't have the green thing back then?
Posted by Jin Kong at 11:50:00 AM