Nose-to-tail, stem-to-root; a foodie’s delight in the lost art of eating.

I grew up eating chicken brains and dandelions. Not that I was forced, but I was told those were the delicacies of a generation’s past.

My grandma would take me to gather dandelions, wild berries, mushrooms, and whatever else we could find. Chopped and combined with a little bit of pork fat, the wild things made a delicious dumpling filling. She would reminisce about the times when everyone in China was hungry, starving, or dying. Being able to find enough dandelions meant a full stomach for a few hours. The way she grew up, a few hours of a satisfying belly was a rare thing.

I miss her very much. She passed away a few years ago and I never got the chance to see her one last time. There is still an unresolved feeling in my stomach these days when I catch a smell of home cooked Chinese food – a smell I associated with her since as far back as I can remember.

When I was born, my father had been accepted to a doctorate program in Beijing. I lived with my mother and her family in some Podunk village in the far corner of the Gobi. We didn’t have a city Hukou then, but I enjoyed the country living. Farmers were just beginning to prosper under the communist regime. I remember my grandma would always make a big deal when someone came from even further remote places with their hens to sell.

“Back when your mama was your age, no one raised chickens. We were too poor and no one could afford to feed their own kids, let alone those roosters and hens.”

She would take me to meet the farmer on his bicycle, stacked cages strapped to the carrying-rack behind his bike seat. The farmers always carried a fresh manure smell, pleasantly funky, warm, and inviting.

“This is my grandson,” my grandma would say proudly, “he’s here to help me carry the big rooster.”

I never did get to carry any of them. My grandma would grab the feet and sling the poor thing upside down. Rooster or hen, they never struggled much; occasionally flapped their wings, they swung silently to their doom.

After we got back, I would watch my grandma hold back the chicken’s head and expose the neck. With a quick slice of a sharp knife to the artery, blood would start to gush. She would place a bowl underneath; chicken blood would be congealed, boiled, and made into delicious soup for the next day.

She boiled hot water after all of the blood had been collected, the lifeless bird would be soaked so the feathers could be easily removed. She would spend some time plucking away and I would manage to fall for a nap only to wake to find the bird immersed in a big pot of simmering water - whole, gizzards and organs floating, with garlic, salt, ginger, and some other spices.

The bird would stay on the fire for the whole day. By the second morning, I would wake to a house filled by the richness of the chicken mixed with a distinct tingling of ginger. That evening, we would gather around and divide up the chicken.

My grandpa and uncle would always get the legs; they needed the strength to work. My mom and grandma would divide up the breasts; I would get a few pieces from them. The honest truth is I never liked the white meat, tasteless and tough to chew. My grandma and grandpa would each get a chicken’s feet - the best part of the chicken according to them.

I would get the wings because everyone thought I would fly away one day. I would need all the help I could get to fly high. I loved it because it was the most tasteful parts. I would suck and savor on the bones until they are dry and meatless. My special prize was the chicken’s brain. My grandma would say it’s good for me and will make me smart. Made sense to a four-year-old then, but I’m not sure if I still believe in that oldwives’ tale.

But I would get excited because it takes a skill to crack into the skull of a bird enough to expose the delicate intact brain matter. If you cracked it too hard, you’d end-up with small pieces of bones and brains scattered. My grandpa would always help me get started, making a small crack so I could take a single chopstick and pry open the top part of the skull. Occasionally I would get a whole chicken’s brain out – victory! 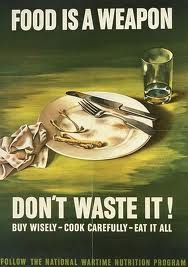 This blog post is written in memory of my childhood, my grandparents, and the good things they taught me about food – sustainable food.

(Wasted food accounts for 20 percent of the carbon emissions from meat and dairy production. - Grist)
Posted by Jin Kong at 10:12:00 AM