What’s wrong with our politics?

I’ve been seeing a lot of news lately about the Tea Party’s assault on the EPA. The Republicans are led by their noses and repeating the message like a good lapdog. I am uncomfortable about the Tea Party politicians’ lack of foresight, but I am more embarrassed by the Republican presidential candidates for their lack of will power.

I can understand the upcoming election is driving the topic and the masses have not had the opportunity to get educated on the global shift to more environmentally friendly business practices and a developing regulatory landscape. But isn’t it our politicians’ job to take the lead and inform the rest of us the best course of action? Or is their job to get elected and suck up air in Washington for a few years of power and fame?

The new bunch claims that the economy is being smothered by regulations designed to keep our air and water safe; they have yet to offer any sort of evidence to support their claims.

In fact, there seem to be record profits recorded in the big energy industry, albeit the wrong kind of energy is being bought and sold in the U.S., still record profits!

I recently heard Rep. Michele Bachmann's promise: "I guarantee you the EPA will have doors locked and lights turned off, and they will only be about conservation. It will be a new day and a new sheriff in Washington, D.C."

What kind of sense does that make?

Back before the EPA was formed, toxins by the ton were being pumped into our rivers, bays and oceans; dirty airs were blown through smokestacks into the air.

Let’s not forget we had a rive caught on fire once, we had whole towns getting sick from the polluted air, we had whole schools of fish die and local economy destroyed, all in the presence of no regulation – all because companies were too greedy to spend money to clean up their own messes, they simply moved to a different place if the problem got out of control.

I’m not too worried about Bachmann. I don’t think she has a chance in hell to make it to the party’s final nomination. But Rick Perry worries me.

Perry still thinks global warming is fiction. He even filed lawsuit to stop the EPA from enacting rules to limit greenhouse gasses from oil refineries, power plants and other industrial sources.

"EPA regulations are killing jobs all across America," he says, but he failed to realize that majority of Americans are worried about air and water pollutions, and think the EPA is doing a good job regulating the problems.

When it comes to killing jobs and destroying the economy, sure; if you count the jobs created from all of those clean up efforts – Gulf Coast anyone? But think about the amount of economic loss from accidents in Louisiana, Alabama, Mississippi and Florida North Carolina, etc., in the recent years. Who is accounting for the losses there? Where are the bean counters for Rick Perry or does he use stick and stone?

I’m not a democrat nor a republican, I want to associate with the Tea Party even less. I am a proud American and I want to remind you that one of the responsibility of our government are to protect us in a national crisis. Our economic crisis is partly attributed to our lack of foresight and the crash and burn profit driven business mentality. It has nothing to do with the EPA. We need our EPA to fight and prevent domestic emergencies just as much as we need an Army to fight and prevent global crisis.

I ask that you become educated voters in this next election cycle. Know that Perry’s strategy is only to fire up the wingnuts from the extremes and know that you must come to the middle and work with others on your views so this country can get the right things done.

Let’s not forget the political squabble that cost us our AAA rating. It wasn’t because we couldn’t pay our debt; it was because our politicians can’t come to terms to work with each other. That’s mostly because the constituents are so easily influenced by bad information. 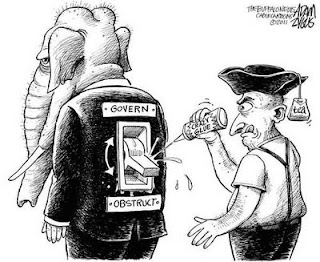 So that’s wrong with our politics – our leaders can’t lead and are taking cues from where the campaign contributions are coming from, our citizens aren’t informed and are fed with bad information. While we can’t cure the campaign-funding problem at the moment and it will be a while before Corporate Social Responsibility really catch up with our problems, let’s be at least informed voters.
Posted by Jin Kong at 6:54:00 AM