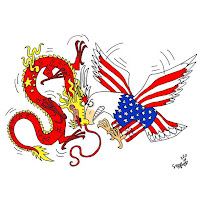 One of the beauty about living in a society that affords a bit more civil and political freedom, at a baseline of social and economic effort, is the ability to access information unrestricted; but this beauty is wasted on the unwary people if that people choose not to act or they lack the access to act for some social and economic reasons. Restrictions to information and lack of access to political will, are two of the same problem we face in modern society, are independently detrimental to sustainable progress.

Here in the U.S., we sometimes forget that acting is only a part, reasonable actions that will yield constructive consequences is the other. Polarization is in part to blame for lack of political will and mismatched action for improper results; we also hear voter fraud at times to question the integrity of the distributed political system; but these are problems I want to put aside for the moment. The focus here is the connection between social and economic rights in the U.S., the status of a welfare State, and our civil and political rights that should act as a safeguard to some amorphous democratic ideals - I want to reflect on something that is potentially useful.

I believe there is a good reason that the U.S. has not ratified the Covenant on social and economic rights. Aside from political polarization and infrastructure problems, I believe the legality of social and economic rights may further corrode the western style republican states. The U.S. politics distributing its decision power to the furthest reach of a federal government possible. This places less burdens on the central government thus promoting more incentives for innovation and progress at the local level. This system depends on the ability to act the quality of those political actions at the local level. If we have a constituent base acting on fundamental principles and are not willing to work with other ideas for uniformed gains, we risk counterproductive action and we are susceptible to corruption. Ratifying the Covenant on social and economic rights would further remove the incentives to act and burdens the already bankrupt system more. The U.S. is already a welfare state, it is now our responsibility, as citizens, to act and shape the system. If other nation of people can start a revolution, there is no reason why we Americans can’t simply cooperate and build a better nation – without the need to continue to upgrade our welfare state. We badly need to restore some fundamental access to responsible actions via education, we don’t need another entitlement program or less government regulation without citizen accountability.

We see NGOs adapt to this strategy. Green Peace, instead of organizing one more protest or stage one more Wale War, decided to educate the suppliers and work with the fishing industries. They came up with solutions to drive sustainable practices rather than more problems for a business. In this economic climate, businesses are trying to survive and if the consumers can help them create sustainable opportunities, these businesses could be the biggest motivator for sustainable transitions in our society.

This is why I have not addressed the protests in New York in this blog or elsewhere. I understand what these protests are about and I think it may be necessary to wake up some Wall Street people who are too far off on the reasonable grid to be effectively converted by meaningful cooperation. But I also believe the best place to effect change is to inspire constructive change. So my place is here, pontificating on a Saturday.

Equally valid is the Chinese’s uncertainties for the Covenant on civil and political rights. China has not signed on to the Covenant for the same basic principles, if only ontologically different than the U.S. with regards to the social and economic Covenant.

Neither protests nor judicial fairness are available to China's citizens to the fullest extent; effecting sustainable changes in China requires a different finesse. A friend told me a few days ago that China is already a democracy and calling for democratic changes in China is like elephant to fly - not that its impossible, but implausible for the purpose of real progress.

My friend asked that I consider this: the Chinese Communist Party has over 70 million people, more than France. It has a voting system and strife just as any political system. On its surface, it may not be a bipartisan system, but it is checked and harmonized for function and for the world to see. It does not distribute its political power further because the basic social and economic goals have not yet been attained at its grassroots. Unlike the U.S., China would not come to sensible conclusions if full civil and political rights are put into practice, we seen one Cultural Revolution already, I hope for not another one.

I believe China is actively trying to update and upgrade its economy given the recent Clean Production Laws and the new Circular Economy Laws. It may not reach a social and economic market maturity comparable to the U.S. of today, but I have high hopes for its soon expansion of civil and political rights. It may need to upgrade its legal system a bit more, in its uniquely Chinese style, and not Western type of litigation driven system. China favors mediation and its should be its focal point. I trust in the mean time the Chinese people and its government will continue to work with the rest of the world in its upgrading its market process not only domestically, but also abroad in Africa, the Middle East and elsewhere where China is investing in development.

What is interesting is China has allowed their green movements gain more influence and momentum in its social media coverage. This perhaps suggests a willingness of China to acknowledge civil and political rights. I also see some news about China allowing citizen to use the Constitution to address legal issues. I think these all point to a positive direction, a direction dramatically different than the China I remember.

___________________
There are all sorts of different acts; this act in itself implies a political necessity – reaching a consensus of what that act should be. Within this act lay the rights of us, men and women and all ages and races alike, of civil and political and social and economic. We are all at different stages of our existence to afford our people different levels of these rights adjusted and tuned to the conditions of the land. We reach a universal harmony and progress is possible. Global coexistence is a good thing, not all global actions are necessarily evil. If we were invaded by aliens, wouldn’t you wish all people of all nation rise to defend our rights? So let’s not pass globalization as a bad thing just yet. Let’s keep the protests going and the blogsphere active in all nations to let the information flow and the learning continue. Nothing violent will ever resolve anything useful. Leave that in the past and at the hands of dead soldiers and their widows. They have made the sacrifice so you and I don't waste our opportunity to act. Let the good times roll.
Posted by Jin Kong at 11:33:00 AM

Email ThisBlogThis!Share to TwitterShare to FacebookShare to Pinterest
Labels: balance of ideas, sustainability