How Mushrooms Might Just Save The Planet - by Izzy Woods

(My wife, Lauren, does not eat mushrooms. She thinks the texture repulsive. I find mushrooms a fascinating creature; growing up eating different kinds and seeing its representation in ancient Chinese medicine made me appreciate the complexity of mushrooms. I will change Lauren's mind about their deliciousness yet, but in the meantime, Izzy Woods asked if she could give us a short, very informative, article about mushrooms. Enjoy! - jin)

Did you know that mushrooms existed on planet Earth before any other plant life form? Mushrooms arrived 1.3 million years ago, several hundred million years before anything else. 420 million years ago giant mushrooms called Prototaxites could be found dotting the landscape, standing at about three foot tall, dwarfing other plant life forms. Mushrooms are essential for maintaining the health of the planet, since their life cycle constantly enriches the soil that trees need to grow.


New Thinking
Groundbreaking mycologists, such as Paul Stamets and Eben Bayer are looking at a myriad of new green applications for mycelium, the fungi root systems that grow for miles underground, holding the soil together. Eben Bayer has made use of these fast-growing mycelium fibres to develop a new system for producing packaging material, which has the potential to replace synthetic plastics, such as Styrofoam, which are a major pollution problem. Synthetic plastics, which are widely used to package delicate computer components and electrical goods, never degrade and cause problems in the oceans and clog up landfill sites.

Bayer’s innovative system involves creating molds which are filled with organic agricultural byproducts, such as rice husk or oat hulls, and then ‘innoculated’ with fungi spores. The mycelium grow through the organic matter, transforming it into a chitinous polymer, which will hold the shape of the mold, and had excellent packaging qualities, such as impact resistance. They material can be waterproofed and fireproofed, making it just as adaptable as its synthetic counterparts. The molds can be used for building materials, furniture production, and even organic matresses don’t seem out of the question. The main difference is that after use the packaging simple composts back down into the soil, enriching it in the process. Bayer’s company, which has demonstrated the effectiveness of this process has just won a contract to supply Dell computers packaging needs, and his innovation has huge implications for world-wide local production.


Paul Stamets
Visonary green scientist Paul Stamets became obsessed with fungi after working in the forests of North America. He has gone on to discover some extraordinary applications for fungi, which will have a significant impact on the future of the planet. He has identified six ways in which fungi can save the planet:

Mycofiltration – this process is used in the cleansing of polluted watercourses, such as those downstream of factories. Burlap sacks inoculated with fungi spores consume and cleanse the water of poisons and toxins, whilst providing protection against the erosion of river banks. The implications of this for those living in areas with low levels of clean drinking water can only be imagined at this stage. Experiments have been extremely successful so far. The ability of mycelium to ‘knit together’ soil and consolidate it, which Bayers utilised in his packaging idea, equally applies to eroding land, and Stamet’s mycelium mats have implications for land maintenance worldwide.

Mycopesticides - Paul noticed his house was infested with termites one day, and simply set to work to develop a fungi based solution, which proved 100% effective and chemical free.

Mycomedecines – one of the most significant areas of Stamet’s research is into medicines, specifically powerful antibiotics derived from fungi, and anti-viral treatments. The discoveries in this field are perhaps the most exciting, with very strong anti-viral, and anti-biological warfare properties being discovered which are many times the effectiveness of anything we have at present.

Mycoremediation - a process used to repair and rebuild damaged ecosystems, and purify polluted soil. Stamets has discovered that mycelium can purify and thrive on oil polluted land, which has major implications for global clean-up.

Mycoforestry – The use of mushrooms in managing forest land, the lungs of the planet, has potential long-term gains by improving the growth and sustainability of trees. Mushrooms have always thrived on the forest floor, and the constant growth and decay cycle helps to maintain the health of the soil over millennia. 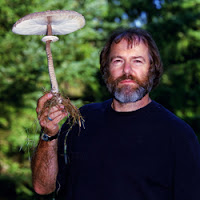 Myconol – A potential new form of bio-fuel was discovered as part of the fungi culturing process. Being able to ‘grow energy’ would clearly have a major impact on carbon emissions and the future survival of the planet.


The Way Forward
Scientists are only just beginning to understand the enormous potential of fungi in the preservation of the planet’s ecosystems and biosphere. It is somehow fitting that the first arrival on earth may hold the answers to planet survival we have been looking for for so long. With courageous and innovative eco-thinkers in the world of mycology this is subject to keep an eye on in future. Once you start reading Stamet’s work you will certainly never look at a mushroom in the same way again.