Our People, Our Planet, Our Social Economy - We Decide.

(Revised 12/15/2011)
With one GOP candidate coming from the China Ambassador’s desk, we can guess the significance of China's status with our domestic policies in the next few years. I have no doubt the political mudslinging invariably will tangle all sorts of harsh criticisms for China into the next election cycle; but business will go on and we still hope to make progress. After all, people are driving politics, we see it in the Arab Spring, I hope we see it in the Occupied movement.  Irrespective of the politics, I have to believe we the people will continue to learn and advance, or else we stand to fall together.

But before we can expect progress, we have to layout some anticipations and understandings to properly assess our relationship with China in the years to come. Is China the new boogieman for our children’s bedtime stories or is China the new friend we so desperately need in combating global deterioration?

Which side do we care to stand on?


First and foremost, China is the largest and most demanding nation on earth. We cannot simply ignore it. China houses one-fifth of the world’s population with 10% below poverty (less than $361 per year). It also has a serious resources scarcity. The country as a whole only captures 8% of the world’s fresh water supply and the very industrial process that lifted so many people out of poverty contaminates much of that water. While you see the lights and fast developments of Shanghai and Beijing, you do not see the destitute of villages and people displaced who had paid for the human price of these developments. As China’s social policies continue to focus on GDP growth, it has recently shifted some of its attention to the environment and sustainable growth.

The task facing China’s leadership is a mounting one, perhaps more of a challenge than our own political inactions in Washington—China knows that it must act, but how to act is the sixty-four million dollar question and time is running out for everyone.

Second, China is a very old nation; while Monotheism was taking roots and causing mayhem in the western world, China experienced similar turbulence in often frequent dynastic changes. Yet China remained one identity, one nation.

The changes of dynasty are often as brutal, if not more, than the Crusade. In part, China was held for the last two thousand years under the brute force, in part it was held under the oppression of thoughts--FenJianSiXiang--old school thoughts of obey and order to a structure amongst other outdated thinking. Women and children were oppressed and considered property to a degree under the Confucian thinking. Communism did eradicated the problem to a sensible degree, but we still see remains of the discrimination deeply entrenched in culture. 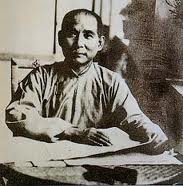 The XinHai Revolution had hoped to empower people to be free of such things. Sun Zhong Shan (Sun Yet Fat)—a man whose passing was untimely and left China in a wreck. Following a world war and civil wars, China was split in two: the Nationalist Party who now controls Taiwan and the Communist Party who now holds the main lands. While Taiwan was heavily influenced by U.S. interest, Communist China was behind the closed doors--distrustful.

Third point, China today is in a period of rapid transition. Next year, when we choose between President Obama and whichever GOP candidate, China will transition its power. The current leadership, Wen Ja Bao and Hu Jin Tao are both trained engineers--technocrats. They are technocrats who came from turbulent times and saw the capabilities of "Feng Jian Si Xiang" (I still have not found an accurate translation of this word but it generally refers to old thinkings of the imperial days) and the madness of the Cultural Revolution. Their successors also technocrats. I get the sense that these particular people believe one’s own destiny and determination is outside the confines of gods. They believe China is a proud nation who can self-determine without an image to represent the order and continuity of a Chinese society. They did not make themselves out to look like emperors, but founding fathers of a nation like George Washington and the such.

The ones who also stake a claim are the sons and daughters of the old red guards who made the Communist China what it is today. Along next to them in line is the generation born after 1980 (BaLingHo) with a very limited sense of the real Chinese modern history but a ready access to the Internet.  What kinds of leadership can we expect from these two groups is anyone's guess and how we shall see China then is at best a sucker's bet.


Whoever these Chinese leaders are in the next 20 years will determine how well the U.S. can tolerate their policies, how much the world can tolerate China’s consumption, and how much the Chinese people can tolerate its own incompetence. Since China no longer has a charismatic leader on the pedestal, it must now vests its fate in the hands of those that can come through the gauntlet of Chinese political machine. (I often hear criticism that China is not a democracy because of its one party system, but someone once told me to look at the number of Chinese Communist Party membership, totaling around 70 million people, and ask if we can’t possibly expect all 70 million, the size of France, to act in a unitary mindset.

From talking to my father, I get the sense that China’s politics are just as fractured as it is complex, just as much as we would expect here in the U.S. China is a one party system but governed by old time connections and grassroots powerhouses; some even Mao had once depend on to win his kingdom. Irrespective of China provincial separations, however, the ability to implement policy changes from the top is China's distinct advantage.

This brings me to my fourth point: China could be more of a partner than an adversary in the years to come but we must know how to influence China and work with the coming generations. I know there are people in China who would like to see the Chinese adopt a more adversarial mentality to strengthen its rule of law modeled after the international norm. I on the other hand, would like to see more Americans understand the Chinese softer approach leverage a uniquely Chinese Confucian sense of harmony to implement mediations. We hear China’s rule of law problems is often attributed to local protectionism, provincial governors wanting to record the largest amount of wealth created, but I get the feeling China's party leadership now recognizes the importance and deep entrenchment of Confucius thoughts in the Chinese psyche. This is the harmonious thinking China is now promoting, a softer power around the world, a general principle that will dictate its rule of law giving the provincial level and various sectors of its society maximal degree of legal maneuverability. China is trying to have its cake and eat it too, don't say we haven't tried for ourselves.

My fifth and final point is this: China is a complex nation with 56 distinct ethnic minorities. It is united in language and ontology by Confucianism, Taoism, Legalism, Buddhism, and a uniquely imperial FengJian thinking that is embedded in the Chinese families; it’s power unified is undeniable—1.3 billion people consuming and producing; it’s destiny not yet determined; its society in transition. What we do with this information will determine how China will choose to interact with us. The combined powers of the U.S. and China will shape our sustainable world in ways unimagined.

Regardless I suspect picking on China will still be the popular thing to do to rally votes in the next year. But if we are to disregard what the politicians says and expect to make positive progress on our own with the Chinese businessmen and women, we must pick up where the politicians fall short. We must understand the issues and do sensibly what we can to help China upgrade its economy as well as its sense of law and order from a uniquely Chinese perspective. We must help China continue to lift people out of poverty and act sensibly towards the environment and each other. Although China lacks clarity and consistency in its laws and enforcement, there is nothing that impedes us from doing the right things in sharing socially responsibility equally and stand to profit from having a better relationship with China.

China has an obligation to its own people to rebuild a sense of virtue-ethics embodied in Confucianism less the blatant violations of international norms. We ourselves must interact with China on more socially and environmentally levels as well. Blind capitalism in China is counterproductive to the developments just as partisans politics is to our own—empowering the people to do what they can in responsible ways seem to be universal solution to both of our mutual problem. To do this together we stand to gain a better understanding of our own destinies in the spirits of sustainable progress from China's new presence on the world's stage.
Posted by Jin Kong at 12:12:00 PM