The first time I had a Coke-Cola I was at the zoo with my mom and grandparents. I was young, it was the mid 1980’s; China was changing. My mom and I had just moved to Beijing, I believe my grandparents came for a visit to see how we were doing. My dad was in the U.S., writing us letters with pictures of his reflections. He looked happy, I did not think much of it then.

We had gone to the zoo that day. It might have been a Sunday or a Tuesday, I don’t remember; it was cold and early, but that wasn’t important. My surroundings were no longer just barren lands and sandstorms, I now lived in Beijing—where I thought everyone wanted to live and learn. My grandparents had come for a visit; together with my surroundings we were strolling through the places where tigers and bears claimed their existence. I was happy, curious, and adventurous. I was indulging in my environment as if everything was perfection.

And I saw the strange markings on an hourglass shaped bottle at the concession stand, with dark contents far from the bright colored soda I was accustomed. I was immediately pinched by the mysteries of this thing I knew then was foreign . . . 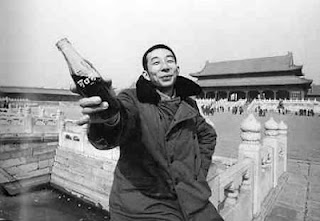 Had I seen these strange letters on the pages from my father?

I must have a try at this.

I begged the sympathy of my grandparents: oh look at the poor Jin-jin who had traveled all this way to Beijing now living away from home; he should be rewarded for his troubles with this thing that is so deliciously and happily named. (可口可乐 literally means ‘both approved by the mouth and by your happiness’; but you can imagine the lost of emotional meaning in such dry and literal translation.)

Why not? Mom and I had suffered the push-and-shove of two of the busiest train stations in China with most of our belongings dragged, lugged, pushed through for days on our own. I was a big man then, almost five; I had helped by managing to not get lost in the massive crowd the entire way; a Coke was just the trophy I deserved.

Yes, I was a spoiled little brat back then; (still am if you ask my wife).

My mom reluctantly forked over what seemed like a large sum for the bottle. I could’ve had five or six of the domestic orange-soda at that price. But I happily watched my first of the mysterious dark liquid pop and fizzle open.

I couldn’t wait, took it in my hand, and just as I would a bottle of the sweet orange soda I chugged the thing.

I don’t remember how my first mouthful of Coke-Cola tasted or how it went down; foam swelled from the dark liquid and a sticky foul sensation still vividly reminiscent on my hand. I remember vomiting, I remember mom cussing for wasting money, grandma trying to wipe me clean, and my grandpa with his arms crossed, half annoyed and half smiling.

I don’t drink much Coke these days for health reasons, maybe once in a blue moon; but that shouldn’t stop you from the intrinsic enjoyments of having one yourself. I’ve always said everything in moderation and it’s your free will to do with what you judge to be reasonable.

Occasionally Lauren will also crave a can of Coke and I would convince her to share it (my wife does my spoiling these days). I don’t throw-up any more, I have actually come to enjoy the taste of cola. I have nothing against Coke the company; and up until recently, I’ve kept a distant irreverence for its brand because I’ve been one of those 'Pepsi guys', mostly for Pepsi’s track record on sustainability performance.

This morning, however, I’ve discovered some new found respect for my once vomitous adversary. For some years now, Coke had been disinterested in sustainable developments. More recent pressures from cause marketing and consumer awareness campaigns, Coke had to take notice and had to take action. With the recent negative publicity and a petition effort against its ties to the American Legislative Exchange Council (ALEC), Coke pulled its support from the ALEC.

Coke-Cola cited human rights issues amongst its top reasons for disentangling the relationship. The most controversial are ALEC’s political support for voter ID legislation that has the effect of suppressing minority, student, and senior voters and its influence on Florida’s infamous “stand your ground” (“license to kill”) law. In between the lines, ALEC is also a player in lobbying to discredit climate change and limit sustainable development. Coke, with its signature water stewardship efforts at the core of its sustainability efforts, must’ve considered the conflict of interests between its environmental missions and public responsibilities against the ALEC’s political ideologies.

I have been noticing more rapid corporate cultural shifts toward sustainability in recent months. The movement has been slow at times, but there are more frequent milestones lately. Others have also observed this increasing optimism and hope this new decision by Coke will further push the collective shift towards a self-regulated socially responsible economy:

Just last week, GM announced that it would no longer provide funding to the lobbying organization The Heartland Institute, which is notorious for its role in delaying effective federal action on climate change. GM, maker of the electric-gas hybrid Chevy Volt, has recently seen sales of its award-winning car soar despite a two-year smear campaign spearheaded by conservative talk show host Rush Limbaugh.

In the past few years the U.S. Chamber of Commerce has also taken hits from a growing roster of major companies that have either distanced themselves from the Chamber’s denialist position on climate change or have quit the organization outright. That includes Apple, U.S. energy giant Exelon and other utilities, Nike, Johnson & Johnson, and Microsoft among others.

I have seen that China's younger consumers are more carbon conscious when it comes to buying. This is a tremendous transformation from the days when I first tried capitalism at its best and vomited in a memorable public place for all the bears and tigers to see.

Back then, the Chinese were just emerging from the anxious Cultural Revolution. For the first time in modern Chinese history (1911 going forward) people were somewhat at ease. Movie theaters then began to show action flicks; rap and Elvis had entered into the little circle of friends I had in Beijing. By the late 80’s and early 90’s, I had owned my first mixed tape of Chinese hip-hop, went on a date with a girl I really liked to a movie I don't remember, and had my first pair of American tennis shoes that made me an inch taller.

But those days were more about getting rich and buying more stuff. Commerce was picking up pace, things like supermarkets and Coke-Cola were novelties. People were not worried about hunger but instead had time to enjoy life. The first McDonald’s and KFC were established in China a few years later; a couple of decades after the Golden Arch and Colonel Sanders invasion, I found China’s big cities transformed into something completely new, something beyond enjoyment and into indulgence.

But then, when I had my first Coke-Cola, I had no idea of my revulsion for the taste would lead me from Beijing to Cincinnati, to Mosul, to Indianapolis, and finally to relive my first mouthful of indulgence happily with my wife who is equally repulsed by things unsustainable.

I wonder if today's spoiled Beijing kids still vomit at their first taste of Coke, or have they gotten used to indulging in things foreign? I wonder when my wife and I eventually spend time living in China again, will our kids have the same reaction to their first mystery of the dark liquid? Will we consume a little less of the colas for the enjoyment of it and not just out of habit? Will the sky be blue or gray? Will the air be fresh or taint? Will we have a zoo or will the animals have left us to our barren lands and sandstorms? 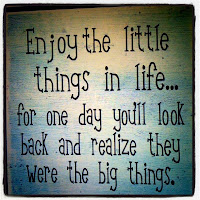 Suddenly my revulsion not so prevalent; my once vomitous adversary now is something I contemplate with confidence. There are things beyond the moment and I see it in the hands of conglomerate corporations that hold the fate of our planet, but their prosperity is in our hands. The vivid foul sensation would transcend itself, the dark liquid so mysterious would be explained and eventually enjoyed in a healthy moderation; fizzles and pops with our cheers. I would have the final say in how I remember our first steps into a modern transformation.
Posted by Jin Kong at 12:16:00 PM