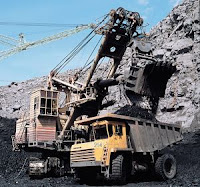 On April 6th I got to tour the Bear Run coal mine (BRM) in Sullivan County, Indiana. Bear Run coal mine is the largest coal strip mine east of the Mississippi river. It spans approximately 15,000 acres and operates 24 hours a day 365 days a year, producing 8 million of tons of coal per year. Coal production is scheduled to rise next year, increasing the production to 12 million tons per year.

The mine drew some attention in the local media recently. The Indianapolis Star also published a story back in January about the health risks of the coal mine. There was also a petition making its way around the Internet (the petition is now closed). That is really the end of the coal mine’s media limelight… just about 15 minutes of fame if you will. This is why my classmates and I wanted to research further into Bear Run’s operations and make our own decisions about its significance.

What was more curious, it seems, is how the largest strip mine in the eastern United States has not drawn a larger discussion on the topic, save a few pages in the Star and an online petition?

We began with reading up on Peabody Energy, the company that owns and operates BRM. We then decided to tour the mine itself; after the movie Erin Brockivich, who can resist some harmless snooping?

Before we took our tour, we researched the environmental issue to the extent that we could. We discovered that BRM is operating under a general permit, which is what has Hoosiers divided on the mining issue. The Hoosier Environmental Council (HEC) portrays the situation as though BRM is breaking laws, such as the Clean Water Act and the Clean Air Act while BRM, along with IDEM, claim no laws are broken and that the mine is operating within all legal standards.

We then looked into Peabody Energy itself--BRM’s owner and operator. Peabody Energy is one of the largest energy companies in the world; located in 21 different nations and on 6 different continents. They provide 10 percent of all US electricity and 2 percent of all global power. They purchased the mineral rights to the coal here in Indiana some years back, but then had to slowly purchase the surface land from locals who lived on top of the coal Peabody wanted. Many locals sold, a few remained. I presumed given Peabody’s size and extensive business operations, following rules and regulations was something they took seriously; at least it appears in Indiana they are.

Federal law mandates that all coal mine operations have permits to operate within a safe and sound parameter.

More than three dozen federal environmental laws and regulations cover all aspects of mining. The following list includes some of those major laws. In addition, each state has laws and regulations that mining companies must follow.
Other laws that impact mining include: the Rivers and Harbors Act, the Federal Mining Law, the National Historic Preservation Act, the Law Authorizing Treasury's Bureau of Alcohol, Tobacco and Firearms to Regulate Sale, Transport and Storage of Explosives, and the Federal Mine Safety and Health Act.


Under the circumstances, mining companies are required to obtain individual permits that require testing for specific pollutants enumerated in our environmental protection laws (arsenic, mercury, etc.,); these pollutants have stricter environmental and discharge standards due to their toxicity and serious threat to health and safety standards. In Indiana, however, coal mines operate under a general permit, which appears to operate under a more relaxed discharge standards. Being the curious ones that we are and the left and right squabbles in a less and less trustworthy media, we decided to tour the mine see for ourselves how BRM operates.

We arrived in Sullivan county around 11 am or so. BRM is located in Sullivan county but is large enough to cover an area of three towns or so: Carlisle, Sullivan, and Duggar. We were lost at first. There were quite a few roads closed and with a car full of gadget dependent city dwellers, we somehow stumbled upon a lake: Locust Lake.

We stopped. We thought to look at the lake more closely, we wanted to see the water at least. We met a couple of fisherman and asked for directions to the BRM main office. Bob, the gentleman we spoke to, had lived in Carlisle for decades and had a lot of information about the mining operations in the region. He told us that Locust Lake was once an old “strip pit” from strip mining. It had been left open to collect water and then was labeled as a lake. Bob showed us a local map pointed out all of the “lakes” in the area—old strip pits that were left open, to fill with rain and then labeled lakes.

The Department of Natural Resources fills these lakes with fish for the locals to fish. Bob didn’t seem to mind fishing out of an old coal mining pit. Although he had no complaints about the lakes or the fish, he did say that he didn’t like how much power BRM wielded. The coal mines are the reason the roads we had passed were closed; “the can just shut a road down and not tell anyone why or when.”

BRM can also reclaim any lake at any point for personal use. Bob said that this had happened recently: Deep lake was a lake that he and his friends enjoyed fishing and that now they can’t access it because BRM is using it for their operations. He said most locals do not like BRM for that reason; the strings they are able to pull to get whatever they want.

We asked about BRM’s support of the local economy. Bob said that the mine only employs about 500 people from the area and that he doesn’t see any real economic benefit for him or his community.

We enjoyed our time speaking with Bob, but we had to be on our way for our tour.

When we arrived at BRM, Mark, a reclamation foreman had been waiting on us. We spent the next 3 hours with Mark driving through the area, seeing the mines and appreciating the enormity of their operations.

Mark took us through the entire process; it was quite the experience. Mark was very informative and answered any question that we had. He explained how the mining was done and some of the byproducts as resulted of their operations. One thing in particular that caught my attention was the waste water Mark called “slurry” that came from washing the coals that were mined. I asked about what they did with the slurry and he replied “it goes into the open cuts in pit 3; which you won’t be seeing today.” I don’t know what an ‘open cut’ is; but I did wonder if it was lined properly so as to not allow polluted water disturb the ground water supply. 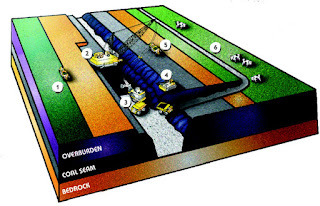 Mark also mentioned something about a “gob” which according to him is dumped back into the pit and must be at least 50 feet down and filled in. This surprised me. I thought the kind of nasty industrial by products labeled as “gob” would be handled in a more environmentally friendly way; how many gob pits are the people of Sullivan county walking over or having their tap water run through?

We left the mine with a new understanding of how BRM operates; the process of how coal is mined as well as the low environmental standards Indiana has for the coal mining operations. We drove around a bit more, taking in the local scenery; we were interested in seeing how many “strip pit lakes” we could find. We parked ourselves on a side road, next to a bridge that was built by Peabody Energy for the railroad system they needed for transporting coal. When we looked down into the ditch and saw the water running were black, our first question was “Is this from BRM?”

I do not know if we will ever find out, but it does make me wonder who or what is on the receiving end of that water…. How many people are drinking diluted black water? 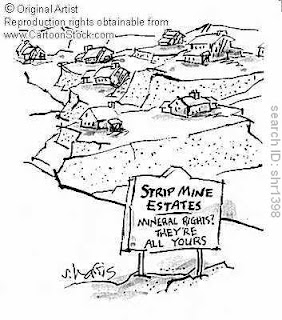 In all of our research, webinars with the HEC, getting lost in Carlisle, and our private tour, we walked away with a new appreciation for the coal mining in Indiana. For me, if BRM is operating within the legal boundaries, those boundaries are obviously not keeping our waters clean. If the coal mines are allowed to operate under a general permit in Indiana and not meet the specific pollutant discharge standards, then it is up to the residents of Indiana to demand higher quality of our own lives.