Chú hé - the Drudgery of Wasting Food - a message from jin 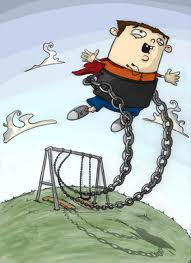 When I was young, my mother insisted that I memorize old Chinese poems. I hated it. I’d rather wear my blanket around my neck and hide under the bed pretending that I was immersed in a castle defending my kingdom from the evils of my studies.

Sometimes, I would chew beside the dinner table, with my legs swinging back and forth to indulge my boredom, while having no escape from my father’s lectures about the importance of knowing these ancient verses—verses that seemed so distant, irrelevant, and compulsory. Later I would equate the feeling I had then with military’s “mandatory fun time”—reciting verses seemed as irrelevant as being told I must report to battalion social functions.

Oh how I hate growing up.

But there is wisdom in doing things that we do not like; there is insight in the things we do not know. If we’d ever stop wanting to learn, to embrace the unknown, forcing ourselves to discover, then we’d stop ourselves from progress; it would be a sad day indeed.

Fortunately my parents would not let me entertain such an idea: learning—like it or not—is pleasure, is it not?

I still remember the day I had to recite one poem in particular to a room full of relatives. It was dinnertime and my grandparents and uncle were in town to visit; we had rice that night and sweat.

Strange, yes I know; what delicious dish could you cook up with grimy and salty sweat?

We had rice that night, I don’t remember much else but I’m sure we had a feast to welcome my relatives. I ate quickly because there was something on TV I wanted to catch. My father stopped me and asked if I was really done.

“But you still have a few grains of rice left in your bowl.” He answered.

“It’s just a few drops of rice. I can’t even pick them up with my chopsticks anyway.”

That was when I knew I was in trouble. 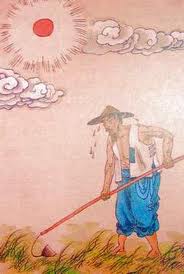 “Don’t you remember the poem you had to memorize? Chu he ri dang wu?” My father asked. “Recite it for your grandpa and your uncle.”

“And what does that mean?”

“I don’t know.” I didn’t care. I was told to memorize them, no one ever told me I had to interpret them. “I want to watch my show now.”

What followed was the equivalent of  when my wife tells our dog “shame.” Our dog, Moe, has now learned to turn his head away, eyes on the ground, pretend to deeply think about why he had dug a hole in the ground in someone else’s yard, but I doubt he knows why the word "shame", so infrequently used, has such power over him.

To this day, I can’t remember what exactly my father said to me after I recited the poem. Vividly, I still tasted the sweat as I finished the last few drops of rice left in my bowl that day. I don’t think I got to watch my show. Even though I still recite the verses today, I have forever associated the poem with sweat and rice with a jarring projection of farmers working in the field, sweating each drop of sweat into my rice bowl; if I did not finish each last drop of rice, I would have shamed their labor, my father’s teachings, and my family’s honor. With so much at stake, I loathe the act of wasting food these days. My wife often wonders why I get so agitated when I have to toss food that is in the refrigerator because they have gone bad, but these days, she is as much disturbed about wasting food as I.

And by our powers combined . . . we sometimes eat questionable leftovers and so far, we have survived.

Food is simply too good to waste. Even the most sustainably farmed food does us no good if the food is never eaten. Getting food to our tables eats up 10 percent of the total U.S. energy budget, uses 50 percent of U.S. land, and swallows 80 percent of freshwater consumed in the United States. Yet, 40 percent of food in the United States today goes uneaten. That is more than 20 pounds of food per person every month. Not only does this mean that Americans are throwing out the equivalent of $165 billion each year, but also 25 percent of all freshwater and huge amounts of unnecessary chemicals, energy, and land. Moreover, almost all of that uneaten food ends up rotting in landfills where it accounts for almost 25 percent of U.S. methane emissions.

Nutrition is also lost in the mix -- food saved by reducing losses by just 15 percent could feed more than 25 million Americans every year at a time when one in six Americans lack a secure supply of food to their tables. Given all the resources demanded for food production, it is critical to make sure that the least amount possible is needlessly squandered on its journey to our plates.

The NRDC recently released a study on the inefficiencies in the U.S. food system from the farm to the fork to the landfill. The information is rather alarming, but NRDC made recommendations and gave examples of emerging solutions. You can findthe report here.

NRDC also kicked off a blog series on wasting food. You can find it here.


To end this short story, I give you the Drudgery of Wasting Food: 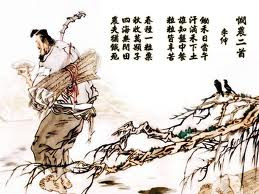 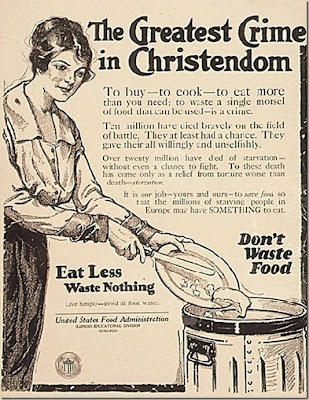 Hoeing millet in mid-day heat,
Sweat dripping to the earth beneath,
Who should know the food in our bowls,
Each grain is born of trying endeavors.