Undervaluation of a Dreamer II

Burma’s military-backed government has one of the worst human rights records in the world. The Burmese army rape, loot, burn, torture and kill, and there is a widespread problem of forced labor. According to Burma Campaign UK: over 1 million people are forced from their homes; there are hundreds of political prisoners routinely tortured; there is widespread use of child soldiers in the country; rape is often used as a weapon of war against ethnic women and children and the military regime was spending nearly 25% of its budget on defense and just 1.3% on health care for its people.

The famous Aung San Suu Kyi spent over 15 years under house arrest since her party won the 1990 election. Finally, in 2010, she was released from detention and in 2012 she won a seat in the by-election and began her visits outside of Burma calling for support for human rights in her country from the international community.

In July of 2012, the U.S. government recognized the hope of a lawful democratic emergence of Burma under Aung San Suu Kyi’s leadership. The U.S. eased sanctions on financial services and allowed new investments into Burma. At the same time, the U.S. government is requiring any U.S. persons or entities with cumulative investments in Burma exceeding $500,000 to report on the processes they have in place to address social and environmental impacts.

This is the first time that the United States has explicitly used a sanctions regime to encourage responsible business practices. Despite the general easing of restrictions, sanctions imposed on conducting business with specially designated nationals -- including a number of large Burmese “crony” companies -- and the military or military-controlled enterprises remain in place.

According to Ms. Lehr, The Reporting Requirements on Responsible Investment in Burma require that U.S. companies submit an annual public report on their overview of operations in Burma; human rights, labor rights, and environmental policies and procedures; arrangements with security providers (if applicable); property/land acquisition, including processes to identify land rights and address resettlement practices, if the property is worth more than $500,000 or over 30 acres and payments to the Government of Burma, sub-national authorities, and state-owned enterprises if the aggregate annual amount exceeds $10,000.

In addition, U.S. companies must also report to the U.S. State Department regarding the contact information of the individual preparing the report and whether the company or individuals representing it have held meetings or had other communications with the military or other armed groups and if so, with whom they met. In addition, they must report any risks or impact with due diligence on human rights, labor, and the environment that they identified as well as steps that have been taken to mitigate them; however, the reported information is confidential and will not be made public.

Moreover, the Reporting Requirements specify that U.S. persons with new investments based on an agreement with the Myanmar Oil and Gas Company (MOGE) must notify the State Department of the agreement in writing within 60 days of entering the investment. The MOGE is infamous for its corruption and its use of forced labor with the help of the military. Aung San Suu Kyi has recently recommended that foreign governments prohibit their companies from doing business with MOGE until the company adopts responsible and transparent business practices.  She noted (emphasis added): 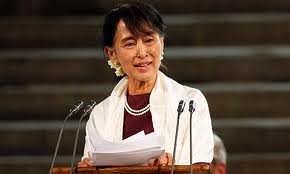 The Myanmar Oil and Gas Enterprise (MOGE), the state-owned company under the Ministry of Energy with which all foreign participation in the energy sector takes place through joint-venture arrangements, lacks both transparency and accountability at present. The Government needs to apply internationally recognized standards, such as the IMF’s Code of Good Practices on Fiscal Transparency. Other countries could help by not allowing their own companies to partner MOGE, unless it was signed up to such codes. This would also ensure that their own companies would subject to the above codes themselves, and to the various requirements of publish what you pay.

It should also be noted that the companies required to report on their business in Burma are not required to actually have human rights, labor, and environmental policies in place. They are merely required to identify whether or not they exist.

Nevertheless, the public nature of the reporting creates some pressure on companies to demonstrate that they take seriously the substantial social and environmental risks of operating in the long-isolated country.

The rest, is up to the marketplace.

Burma presents Western businesses with a mostly untapped market, according to Ms. Lehr. There is an elevated risk doing business in Burma due to internal conflicts and a weak rule of law, but who is to say the rewards do not outweigh present fears? But here is a people so vulnerable and controversial, its market presence must be transparent; its social and environmental concerns clearly measured. Here is where consumers ought to be most educated about the topic and vote with our purchases to show how we wish the Burmese people be treated.

Burma is both an opportunity to demonstrate the efficiency of capitalism and an opportunity to extend the goodwill of a responsible capitalist market, Burma is a place where human rights, environmental concerns, and market incentives join as one—where we are able to implement the four aspects of sustainable growth balancing the interests of people as self-governing individuals, the interest of a community formed by the people in willing consent, the environmental interests, and the market incentives that must move all of these parts.

The imposition of the requirements indicates that, although the Administration wants U.S. companies to invest in Burma, both the government and civil society are deeply concerned about the ability of companies to operate responsibly in that context. Due to such worries, U.S. companies have a significant incentive to enter this market in a manner that follows international best practices regarding the environment, human rights impacts, and corruption – and a chance to demonstrate that U.S. businesses indeed are partners of choice.

Western multinational companies entering Burma will therefore be in a “reputational fishbowl” as the organizations that strived to maintain sanctions against the Burmese government turn their attention to the role of companies inside the country.

This condition thus creates an advantage for socially responsible entities, but Ms. Lehr warns of the risks: ongoing corruptions and military intrusion into politics, lack of communication and basic infrastructure, regulatory barriers, antiquated laws, and public discontent. Yet despite these risks, Ms. Lehr elicits hope: Burmese people demanding better environmental protection and conservation, better wage and labor conditions, and general increase of standard of living. These are by-products of a well-managed constructive capitalist regime.

Therein lies the opportunity. If Western companies operate according to international environmental and human rights standards, such as the U.N. Guiding Principles on Business and Human Rights and the OECD Guidelines for Multinational Enterprises, they will differentiate themselves and become partners of choice both in Burma and the region.