Fear and Creativity, the Pre-Arranged Dichotomy – by Lauren Campbell

‘Green’ has become the buzzword of the decade. The color green is the hottest color of the year, at least in the advertising business, and the image of Earth is on more billboards and commercial property then one could ever count.

Going green is everywhere. Or is it?

Even though we are bombarded with the positive aspect of people ‘going green’ daily, actual education on environmental issues and information on how to address them is hard to find; not to mention how difficult it has been to convince the broader public that those issues are really there.

The lack of Environmental Education (EE) in our culture is alarming, especially given that EE has been going through 40 years of evolution.[1] During the Nixon administration, when EE was still in its infancy, the Tbilisi Declaration defined the objective of EE as

“to prepare the individual for life through an understanding of the major problems of the contemporary world, and the provision of skills and attributes needed to play a productive role toward improving life and protecting the environment with due regard given to ethical values.”[2]


The Tbilisi Declaration provides important guidelines for EE: fostering a holistic approach to environmental awareness, recognizing the interdependence of our communities and the environment, and understanding the need to create new behavioral patterns among groups and individuals.[3] However, even with a strong environmental education foundation and government support for such educational programs, pro-environmental behavior has not improved enough to make the positive impact needed on our environment.[4]

In 1992, the EPA, recognizing the need for a connection between knowledge and action, defined EE as: “Increasing public awareness and knowledge about environmental issues and providing the skills necessary to make informed environmental decisions and to take responsible actions.”[5] In accordance with this idea, Dr. Short reminds us that any educational endeavor that endures, “must ultimately serve the social function of transmitting knowledge, skills, attitudes, and behaviors that provide long-term benefit to the individual and community.”[6] We all know that educating an entire generation of children and teaching them to be productive members of society cannot happen overnight. Environmental Education, which is to serve as creating productive environmental stewards, is no different; however, even after 40 years of development, EE has not rooted itself as an educational norm.

Dr. Short explains that “education ‘for’ the environment should, in no manner, imply coercing prescribed behaviors that are unduly influenced by individual teacher perspectives”[7] and “the pinnacle of many canned environmental programs in schools involves a cheering session to motivate students toward participation in pre-arranged sets of activities focused on consumer or ecosystem behaviors.”[8] This external push by the teachers disengages students, creating a dichotomy between ‘wanting’ to help and ‘being forced’ to help; the latter ending in an unmotivated student who has a lack of vested interest. He gives many examples of successful environmental initiatives created by students, whom given the ability to see the project through in its entirety, even as long as 18 months, would step up to the challenge. This process alone provides young adults and children with the experience to follow through and builds confidence. As this confidence grows, he states, “using a well-established curricular framework based on the Tbilisi principles would help the teacher’s influence fade as students gained more skills and confidence in their own investigations, conclusions, and actions.”[9] This process enhances student empowerment and motivation toward action, as well as builds self-confidence through critical thinking and creative application.

Young children are especially motivated to get involved when given creative freedom to address environmental issues; they are more motivated to pay attention to the topic, they delve deeper into research, and during the exercise, experience deeper cognitive processing which leads to better memory retention. In the video by the World Wildlife Fund, children are given three days to creatively research an environmental issue, present their findings, and develop how to raise awareness on the topic. Working collaboratively, children chose topics ranging from endangered animal habitats to carbon emissions. The three day creative experience ended with children retaining much of what they had learned and recognizing how animals, humans, and the environment are interconnected; a by-product of deep cognitive processing and demonstrating the importance of creativity, not only in our educational system as a whole, but to the development and implementation of Environmental Education. 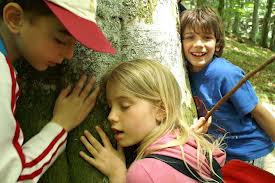 Ken Robinson, a well-known author and public speaker on the topic of creativity in education, discusses creativity in children and the impact it can have on our future, emphasizing creativity as a vehicle for adapting to change; which is crucial when dealing with the environmental crisis we have today and the changes in weather, natural resources, and the impact it has on human health, that come with it. Robinson points out that creative children are not frightened of being wrong, and “if you’re not prepared to be wrong, you will never come up with something original.” The innovative necessities of our future depend on originality and creative design. He also points out that the lack of fear causes more children to ‘give it a go” when they do not know the answer; motivating themselves to try even when facing the possibility of being wrong.

According to Dr. Slohova and colleagues, the creative process fosters the “capability to take risks, the readiness to overcome obstacles,” in addition to enhancing intrinsic motivation.[10] Ideas that push societies forward are creative ones, and people who are creative tend to have less fear of taking risks, this combined with the collaborative, diverse atmosphere that many EE programs provide students, one would think great environmental solutions would be readily available.

Steven Johnson, author of the book Where Good Ideas Come From: The Natural History of Innovation, explains how patterns of innovation occur in the most biodiverse situations. We see it in nature in the rain forest, where species are the most biologically diverse than anywhere else in the world; we see it in space, where elements form in the most molecularly diverse areas of space; and we see it in humans, where the best ideas come from learning from one another and the ‘stitching’ together of individual ideas. Historically, ideas originated from urban areas and spread via word of mouth to rural areas. Now, because of technology, those ideas are able to spread across the globe in minutes, offering us the benefit of diversity without having to actually leave and go anywhere; making diversity easily accessible and just as critical as creativity to successful EE programs.

Learning to think critically about environmental issues is vital to fixing environmental problems. However, motivating the critical thinkers to act is where EE has had problems in the past. Breiting and Morgensen[13] agree and claim that EE needs to foster the development of critical thinkers who can participate in environmental issue resolution through personal choice of action; this combined with an emphasis on creativity and diverse collaboration, environmental educational programs may finally get the results they have been striving so hard to achieve.