On Language and Games – the Wittgensteinian Fly From a Bottle.

A while ago the European Journal of Law Reform published my article on China and Sustainability. I was flattered but I had doubts that few will actually understand what it is that I tried to say. I had shared it before it went to print with many of my peers; the consensus feedback was that it lacked a certain precise thesis, or that it was trying to achieve too much with too little space and focus.

I politely acknowledged their comments and I never changed a thing. It wasn’t to be rude to their kindness nor was it pretentiousness on my part to think their advice illegitimate. Rather, it was because the preciseness of my article does not come from its linear thought provoking powers nor its deconstructive worth.

No, I resist the linear and deconstructive means of writing. To me, words are beyond their precise definitions and understanding takes something more than mere comprehension. There is a sense of uncaptured truth in Gödel’s incompleteness and in order to manifest an article to truly have transformative power, I write to express something beyond a mere thesis or meaning.

The article was thus not meant to be something precise or linear; it was meant to be a work of art, to be used; it is to be a whole more than its parts as interpreted by the reader, not the writer, and it is meant to be a composition of my sentiments for the critical transformative nature of China’s current position as apparent, and for the expenditure, to those who are living in such a transformative environments. 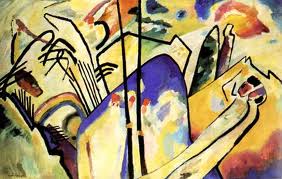 After all, you wouldn’t expect Beethoven to give a thesis of his Ninth Symphony nor would you ask Kandinsky what had intended precisely with his Composition IV? Would you? But to appreciate both and to fully know what they are intended for, you would have to have passion and an undeniably persistence in experiencing the human experience thus employing them to your own use, wouldn't you?

In essence, I write for you to interpret and understand the rules of a game we all play; and the end game scenario is when the fly is out of the bottle, completely free of its confinements arbitrarily defined. Yet by all of my narcissistic self-indulgence of such an act of creating an art for the world to see, I now come to realize that in order to properly express the intended use to the reader I must make one pre-qualifying point come to clarity—that there is something to be said for Wittgenstein and the games he played.

Wittgenstein is arguably the greatest philosopher of the 20th Century. His posthumously published book, Philosophical Investigation (PI), was a contrast to his old thoughts as appeared in Tractatus. What Wittgenstein reasoned in PI was a hope to expose fallacies in the traditional way of thinking about language, truth, thought, intentionality, and philosophy. It is, in effect, a work of therapeutic nature to cure the world of misunderstanding perspectives.

Traditionally, we take meaning of language as having something exterior to support the proposition. We take this “something” as generally the reality of our context, be it some object or some mental representation of things; but as Wittgenstein had pointed out, “if we had to name anything which is the life of the sign, we should have to say that it was its use” (the Blue Book).

To ascertain the use of a word or proposition, then we must look to how the words or propositions are put into place. I highlighted this in my article on how the Chinese people are able to create new language “master frames” to reincorporate words to different use and thus arriving at some tangible results for the betterment of their environmental activism. So my articles aimed to point to nothing that is a generalization, but specific, historical or otherwise, uses of Confucian’s traditions in practice of gift giving and the such. In understanding that the Chinese people have detached their use of Confucian propositions of rituals and formalities and replaced them with a modern sense of capitalism, we understand that a new perspective is necessary. Thus a revival of the transformative nature of Confucianism is necessary.

So this is the game we play—a language game, one which will be of immense power if properly used.

Wittgenstein sought to highlight the repudiation of generality in philosophy, replacing it with the more relational—family resemblance—of use as more suitable means of connecting particular uses of the same word. I encourage my readers to consider the family resemblance between relational metaphysical manifestations of Confucian ontology in its transformative nature grounded in the emphasis in education with a process type metaphysics that focuses on the relational of being from moment to moment. In this sense, China’s rule of law problem is no longer a final and essential definition of the game we play; rather, China’s language and ontological influences is what we find common to all of the activities we desperately wish to enforce with some legal regime.

Thus, rules that govern are not relativistic to the Chinese culture or the political reality. Rather, rulemaking is arbitrary and the only true force that matters is the force of creativity under a formative freedom so enforced. In this light, the substantive is left to the government and the relativistic international standards, but the Chinese people, its artists and scholars, will ultimately control its own destiny. The liberation of China thus does not involve elimination of any external or internal authority. Rather, the liberation comes from the limitation of those arbitrary rules limited to their equally arbitrary application; true liberation comes from each and every individual Chinese person.

“If everything can be made out to accord with the rule, then it can also be made out to conflict with it. And so there would be neither accord nor conflict.”

Email ThisBlogThis!Share to TwitterShare to FacebookShare to Pinterest
Labels: balance of ideas