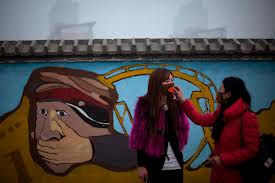 Scentless poisons
and fractured hearts,
Indulge your tasteless fragrance
while everything falls apart.
You trap yourself in this fume,
You remove yourself into your wealth
beyond your gloom.
The poor suffer
while you pretend your do not see,
The young are dying
while you pretend you do not hear;
It is your world of a fantasy,
With padded walls of your own fallacy.


You are no longer human,
Just a toy,
a hamster on a wheel;
In the end, you are just crazy.

Recently Beijing’s air reached dangerous levels. On January 12, just a month before the Chinese New Year, Beijing saw a reading of 755 on the Air Quality Index (AQI). The AQI is based on the recently revised US EPA standards measuring fine particle pollutions; it codes ranges of pollution to tell the public just how dangerous the air is.

I’m not sure what category is beyond “hazardous” on the AQI but the word “lethal” comes to mind. As an Economist journalist living in Beijing puts this in further perspective for us:

“Apart from the AQI readings above 700, we were quite struck to see the readings for the smallest and most dangerous sort of particulate matter, called PM 2.5, which can enter deep into the respiratory system. These are named for the size, in microns, of the particles. A reading at a controversial monitoring station run by the American embassy showed a PM 2.5 level of 886 micrograms per cubic metre; Beijing’s own municipal monitoring centre acknowledged readings in excess of 700 micrograms.

For perspective on that set of figures, consider that the guideline values set by the World Health Organisation regard any air with more than 25 micrograms of PM 2.5 per cubic metre as being of unacceptable quality.”


Fast forward to Chinese New Year’s Eve, February 9, 2013. As usual, my wife and I traveled to Cincinnati to gather with my parents and my brother. We sat around all day to eat dumplings, fish with eyes, and many other delicious food my parents conjured up. We then corralled, mostly in an idle vegetative state, and we glued our attention to New Year’s celebration on TV curtsey of CCTV. I had grown up in Beijing during the 80s; one of our family’s favorite past times was watching the celebration on TV and at midnight, we would go outside and light up as many firecrackers and fireworks as possible to celebrate the passing of another lunar year. Since we moved the US, we gave up on our fireworks, but we still manage to watch other Chinese people, via satellite TV, go about their usual celebratory business and light up the Chinese skies with various luminous extravagances.

This year, due to the exceedingly bad air quality, many environmentalists came out on TV to protest the tradition. There is weight in their criticisms: Proportionally, for every 270 grams of black powder used, 132 grams of carbon dioxide (CO2) are created. The ratio of CO2 emission per volume used is then 0.4889 (132/270).

I’ve not yet found any numbers suggesting the total volume of fireworks set off during recent Chinese New Year’s celebrations, but I’m sure it’s an astronomical number. Global Times has documented the environmental impacts from 2012:

"After an hours-long fireworks spree on the eve of the Lunar New Year in 2012, the density of PM2.5 increased sharply to 1,593 micrograms per cubic meter at one downtown monitoring station, or 1.5 times higher than this year's most polluted day in Beijing."


The debate on fireworks is a bitterly divided one in China. As one Beijing CCTV journalist pointed out that setting off fireworks is a folk tradition that goes back thousands of years (dating to 200BC). Even though Beijing has put out a fireworks ban for 15 days leading up to the New Year ’s Day, many children and adults alike will likely find a way to set off a few and welcome the new year. I can’t blame them. If I were still living in Beijing, I would be so wrapped up in the coming of a new year that I would cherish the rebellious spirit upon hearing firecrackers going off in some remote places of the Beijing streets.

But I would feel perversely guilty. After all, the government is trying to do what it can but it’s the individuals that must do more. And while it’s a balancing act to retain the tradition of celebration with modern anxieties, it is more of a quest for pertinence to educate the individuals so that they are making the right choices. This matter goes beyond fireworks and New Year’s celebrations; it goes beyond just few days of indulgence. What about the cars on the road in Beijing that are spewing noxious gases? What about the heavy dependencies on coal and other polluting energy productions? What about the idea that getting rich is good no matter what the cost?

In many ways, the Chinese people brought this onto themselves and this is not just about fireworks; the government blindly allowed this to happen with its liberal market force policies: developments, consumptions, heavy industries, and yes, even providing a false sense of security.

A while ago, I wrote an article (published by the European Journal of Law Reforms) on how it is that China can curb its problems. The article focused on China and its many environmental and social problems, but the main focus of the article was a call to understanding—that the Chinese people must be the ones to undertake the responsibility to cure China of its ills. The sparseness of legal enforcements in China is not due to some inherent government failure; the corruption is not due to some systemic problems in government. Rather the people allows it, cherishes it, and above all, strives to be the one who will break the law, be the corrupt official, and make a billion in the process of their ascend to the pit of human indignity.

"In other words, this is what civilization is, destroying life while creating a toxic mimic of life and then worshiping its creations."  - Generation Alpha friend Premadasi (curtsey of facebook).


To this I say: this is what civilization has become, but not what it is necessarily doomed to repeat; civilization is defined on the ground that virtues and formalities of humankind is what makes a person a Person; Personhood then cures the ills of laws of nations; the process of curing those laws will lead a People to its morals; and it is upon those morals can a nation build and govern--仁 礼 誠 人 | 人 必 治 法 | 法 修 其 德 | 德 必 治 國.
Posted by Jin Kong at 11:53:00 AM