How to Make Great, Green Cities: People, Water, and Streets - by Stephen Wade

(At the beginning of 2013, The Green Elephant - TGE - decided to embark on a journey; we decided to look for other bloggers and engage them on various green topics. We defy the new social media trend that less is more, that blogs are just the mundane. We wanted to inject wisdom and deep introspection into the new media culture. So we asked bloggers to write on topics we proposed and we asked them to cite to sources to direct our readers attention to proper knowledge. This is about learning and bringing joy to those who would want meaningful change. There are no empty slogans here, no fast remedies for our troubles. The articles are not meant to be something precise or linear; they are meant to be a composition in a work of art, to be used; the whole is meant to be more than its parts as interpreted by the reader, not the writer, and they are meant to be transformative in nature. So as I compile and edit them, I bring them to you individually, and at the end of every two months, as a whole. Stay tuned.

Today, we bring you a piece written by Stephen Wade of the 2nd Green Revolution. We asked him to contribute on the topic of green buildings; he wrote this specifically for us and we thank him for his efforts. You can learn more about Stephen on 2nd Green Revolution's Writers Spotlight.)

“Never doubt that a small group of thoughtful, committed citizens can change the world. Indeed, it is the only thing that ever has.” – Margaret Mead

How to Make Great, Green Cities: People, Water, and Streets
- by Stephen Wade 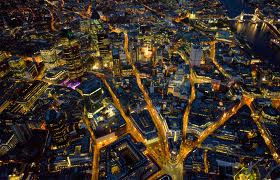 What does it mean to be green? In the modern era, its meaning has evolved from Rachel Carson’s documentation of pollution in Silent Spring, Teddy Roosevelt and and John Muir’s founding of the National Parks, and Henry David Thoreau’s solitary musings in Walden to a more complex, integrated, consumption-based, and urban meaning exhibited by Al Gore’s Inconvenient Truth, the emergence of the ecological footprint concept, and reports by the Environmental Protection Agency (EPA) about creating equitable, healthy, and sustainable communities.

Simply put, New York City, once considered the antithesis of green, now has some of the lowest per capita energy consumption in the USA because of its extensive reliance on public transit.[1] If green is now analogous to urban, what are the elements that make for great urban places?


As Harvard professor and New York Times contributor Howard Glaesar argues in his new book, “Triumph of the City”, the key to successful cities is clustering people close together. Agglomeration economies,[2] benefits that come from businesses and consumers locating near each other and reducing transportation costs, originally drove the growth of places like New York City, Detroit, and Chicago. However, as Glaesar argues, the entrepreneurial tradition of New York City has remained strong, especially in industries like financial services (whether that sector in particular contributes to sustainability is a whole other question), whereas a place like Detroit became more risk-averse and less entrepreneurial as the major auto industries consolidated and reduced competition. This thinking dovetails with other economists who see economic diversification as the key to economic resilience. The economic diversification index is a key measure for the progress the federal government is making towards sustainability. Therefore, one key to great, green cities is the clustering of entrepreneurial and diverse people, businesses, and ideas.

While a city does need clear rules allowing for buildings to cluster, the first steps are for a city to have clean water and be safe. Cities like Boston, London, and New York City made major public investments throughout their history to ensure access to clean water, thereby significantly increasing the sheer number of healthy people. Then, by increasing their residents sense of safety, the city smoothed the way for increased clustering of people and buildings. For developing countries today, Glaesar argues that these investments will lead to growth. In “The Travels of a T-Shirt in a Global Economy: An Economist Examines the Markets, Power, and Politics of World Trade”, the author, Pietra Rivoli, provides the context for urban, economic change. As countries have historically gone through industrialization, many started out as low-wage manufacturing economies, slowly growing their middle classes and infrastructure, and consequently increasing the workers’ demands for goods and better living and working conditions. As these demands increased, manufacturing moved to cheaper locations again, enabling and challenging the first country to find newer and more profitable industries. Glaesar’s and Rivoli’s arguments are optimistic in that they are hard to square with the current conditions for much of the world’s poor. Maybe if one compared the poverty of 19th century New York City with contemporary distressed cities, one would be similarly optimistic about their potential for change.

The other major element of a great, green city involves the place where people spend much of their time and their money, on the streets. While I have argued in the past that the design of streets reflect a community’s values, there is also strong evidence that making streets more “livable”, i.e. walkable, bikeable, is essential to green cities. The fundamental law of road congestion, that vehicle miles traveled increases one-to-one with the number of miles of new highway, makes it clear that cities can’t build more roads to reduce traffic. Building more roads grows car traffic and therefore pollution. Similarly, more fuel efficient cars aren’t a silver bullet. Efficiency improvements often result in more consumption, sometimes called Jevon’s paradox.[3] Finally, one of the seminal studies on road design by Donald Appleyard, “Livable Streets”, speaks to the social health of residents, another aspect of a green city. Residents who lived on light traffic streets had significantly more acquaintances than residents of heavily trafficked streets. The lighter the traffic, the larger the residents’ perceptions of their “home” territory. By building streets that offer more choices than simply driving, cities can reduce pollution and grow residents’ perceptions of their “home”.

There is little doubt the definition of green will continue to evolve as science continues to improve and cities continue to change. While the early efforts of Carson, Thoreau, Muir, and Roosevelt jump started a movement for a healthy environment, the work of many more thinkers and doers in ever widening fields will continue to reshape and grow our communities on a foundation of green thinking. My hope is that those efforts increasingly focus on the places where people and ideas have always congregated, cities.