Humanism, properly speaking, is not an abstract system, but a culture, the whole way in which we live, act, think, and feel. It is a kind of imaginatively balanced life lived out in a definite social tradition. And, in the concrete, we believe that this, the genuine humanism, was rooted in the agrarian life . . . 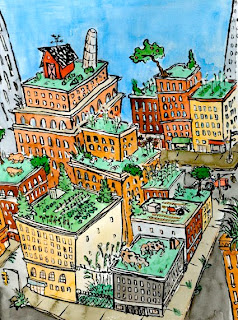 Urban agriculture has become popular these days.[1] The movement of growing our own food and raising our own farm animals has been embraced by locavors, foodies, hippies and anarchists alike. The reasons for urban agriculture’s increasing popularity are many: some advocates for relocalization of food production to reduce carbon footprints of food,[2] some think it’s about food safety and security,[3] some want to save money,[4] some believe it to be a patriotic duty,[5] some believe in food sovereignty thereby claiming a defiance of government regulations and embracing self-reliance as a virtue;[6] then there are people like me who enjoy the labor of growing something, the love for food and connecting with it on more intimate—and often muddy—terms, and the nostalgia for having helped my parents grow all sort of things as a kid.

Whatever your poison happens to be, urban agriculture invariably runs at odds with some of the traditional Euclidean Zoning ordinances that separate residential uses of land from agricultural uses.[7] Since the first days of Euclidean Zoning, municipalities have regulated urban agriculture in a number of ways. Reasons for justifying these kinds of regulations are barren—stuck in another era. Mostly because of the shift towards industrial farming, agriculture is seen as something that is intensively polluting (it is worth noting that agricultural runoffs from pesticides and fertilizers are serious sources of discharge of pollution into our waters and is not regulated as the EPA chose to exempt such runoffs from their regulations perhaps due to the weighty influences of industry lobbyists).

As population disappeared from rural America and as family farms consolidated, people moved into cities and suburbs. With the explosion of cookie-cutter homes built for the benefits of FHA and VA initiatives designed to help Americans become homeowners at the end of WWII, city dwellers simply forgot what it was like to put their hands into dirt and grow their food. The industrial revolution brought packaging and food regulations followed; Americans are further removed from the sources of their food and are made to believe that fishes have no eyes and chickens have no feet. As a result, farming and the food industry are industrialized, mechanized, and distanced from our daily lives; residential landscapes changed and yards replaced gardens. The iconic and uniformly green lawn became a status; food became boxed and vegetation became a nuisance.

At the same time our municipalities are erecting walls between us and our food, the industrial food complex has created food insecurity and food deserts, both of which can be blamed for our significant healthcare cost and problems: obesity, diabetes, and heart disease. Because the current U.S. agriculture policy rewards the overproduction of corn, much of the excess is turned into high fructose corn syrup and included in other types of processed foods. With our keen focus on calories and not nutrition, the fast food industry is engaged in an arms race to see who can produce the biggest burger for the least amount of money. This has created an unhealthy culture of industrialization of meat production in conjunction with our over production of corn. Cows are then fed corns, which makes them terribly sick and have to be injected with massive amount of anti-biotic to keep them alive long enough to reach slaughter weight. The reaches of this evil if far and wide: environmental problems, health problems, food safety problems—the complex interdependencies of our food industrial complex created a monoculture of agribusiness, coupled with heavy reliance on fossil fuel, has reaching implications in the inflexibility and lack of resiliency in our food system and hence our food security.

Recognizing the demand and the many problems of our current system, many municipalities are now looking for ways to encourage the so called “green” food economy.[9] Embracing sustainability and the new green movement, municipalities are shifting away from the traditional Euclidean Zoning format to mixed-zoning methods to allow households to grow and harvest. However, it is naïve to believe this kind of change in zoning regulations will resolve our problems overnight. The deeper issue is that we have so adopted ourselves to an industrial way of life that we forget the alternative advantages of an agrarian society. Therefore, the focus of any progressive movement is not on zoning per se or on farming alone; rather, the focus is on civic virtue—by cultivating behaviors in individuals that contributes to the strength of the community as a whole, by embracing the self-sufficient mindset to promote philanthropy and reciprocity, and by forging the community interest with legislative interest to shift the industrial interest into a “growing interest”; by these complex interactions of civic virtue of individuals and republicanism of municipalities we can then expect a robust sense of growth in communities that means more than industrialization and packaging. Thus progress reaches beneath the superficial level of comfort and riches; we the agrarians reach beyond what is offered on shelves because we will have grown something by ourselves for the good of others.

The world today is much too centralized and complicated. Individuals have been marginalized and stripped of their sense of responsibilities, democracy relegated to the most trivial of such an idea. In this modern world of ours, everything is institutionalized, industrialized, and imaginatively colonized by corporations, special interests, and big governments.

In the US, small and medium sized towns are declining; cities are growing and urban sprawls are destroying lands and concentrating man-made problems. The urban employment markets are over-saturated, the industrial sector over-mechanized. Yet, we seem to be more willing to build bigger and better machines than we are willing to build smarter and better communities.

In this context, we find the past not a mythical golden age, but a ruminant of our hope long forgotten. With the issue of slavery behind us and civil rights to some degree achieved, we now revitalized the idea in I’ll Take My Stand—that perhaps an agrarian society is a better option for us and for the world at-large. An agrarian society is one in which agriculture is the leading vocation, from which all other labor derive their philosophical purpose. To cultivate something, in a sense, should be elevated to the highest of our ontology; and the process of cultivation yields the highest form of our epistemological endeavors. To grow something, then, becomes the ultimate purpose in an agrarian society; and in our attempt to grow something, a process-type metaphysics takes over the idle existential one—religiosity is replaced by a broader sense of spiritualism, and pursuit of happiness takes on meaning. In the context of I’ll Take My Stand, the culture of nourishing earth becomes a priority; the culture of simply making more gadgets and widgets readily apparent as frivolous; and the culture of democracy—that the responsibility of a society rests with its people and not the separated rich and the powerful—takes shape. . .

[1] For a more detailed discussion on this topic, please see Sara B. Schindler, Of Backyard Chickens and Front Yard Gardens: The Conflict Between Local Governments and Locavores, 87 Tul. L. Rev. 231 (2012).

[7] Patricia E. Salkin, From Euclid to Growing Smart: The Transformation of the American Local Land Use and Environmental Controls, 20 Pace Envtl. L. Rev. 109 (2002) (“Almost a century later, local governments are finding themselves limited by zoning schemes . . . .”); Angie Basiouny, One Backyard Bounty Ruffles Some Feathers, News J., (Sept. 23, 2009) (“[D]ozens of local governments nationwide [are] dealing with the intersection of lifestyle and land use as a recession-fueled interest in urban farming collides with strict laws originally drafted to keep neighborhood clean and tidy.”). See also Internet Buzz: Concept of Jail Time for Growing a Vegetable Garden, MyFOXDetroit.com (july 12, 2011), http://www.myfoxdetroit.com/story/18456719/internet-buzz-concept-of-jail-time-for-growing-a-vegetable-garden (Julie Bass received a code-enforcement ticket followed by a misdemeanor charge for growing vegetables in her front yard and refusing to comply with the city’s demand to remove the garden; she faced 93 days of jail time).