Yesterday, the Chinese government announced a plan to curb air pollution by limiting coal usage and taking some heavy polluting vehicles off the road. The new plan is a response to the steady stream of criticism of the country’s environmental problems; released by the State Council, the plan acknowledges some of the basic causes of the country’s air, water, and soil pollutions and sets out specific air quality goals by region. The plan also calls for the removal of all heavy polluting vehicles registered before the end of 2005. High standard gasoline and diesel vehicles will be provided in certain cities to help with the transition but the plan did not set targets for new vehicle emissions standards.

The plan said Beijing must also bring its average concentration of PM 2.5 down to 60 micrograms per cubic meter or less. That would be two and a half times the recommended exposure limit set by the World Health Organization.”

I remember living in China in the 80s, everything was about coal. We had a small indoor coal burning stove that was vented by a piecemeal pipe haphazardly taped together by our friendly neighbor. The coal we burned were allocated by stamps we received from mom’s work and I fondly recall the pride we felt as China emerged from the long dark roads of feudal rules and the Cultural Revolution. But back then, no one knew the devastating effects of burning coal. I remember Mao had famously said that he would see to it Tiananmen would be filled by chimneys marking the industrial production that would allow China to rival other developed nations. Such was the focus of a nation of repressed people, now with hope from the black gold.

Because of the early development policies, coal consumption in China grew rapidly. Everything seemed to be changing, however, in the 90s. With rapid population growth and economic development, China’s leadership realized their difficult choices ahead. With the passing of Mao and Deng stepping down, the old China was a distant memory and the new Chinese leadership emerged and somewhat evolved from their entrenched believes. Modernization became the key and in the mid-1990s, “sustainable development” was added to the 9th Five Year Plan’s vocabulary. Soon after, China published its first National Sustainable Development Report and marched forward. Setbacks are inevitable, however; after China joined the World Trade Organization in 2001, the government put in place incentives for foreign investment in sectors of polluting industries and China soon became the offshore destination and the factory of the world. China focused on the manufacturer of concrete, iron and steel, textiles and clothing; and in more recent times, China because the key producers of cars, phones and more. With rapid modernization and continuing improvement of standard of living for the middle class, the Chinese government and the Chinese people suddenly found themselves amidst widespread pollution issues.

In 2003, then President Jiang Zemin openly spoke of environmental and resource concerns. In his call for building a xiaokang – a well-off – society, he asked that China focus on its sustainable development abilities, improve its environment, address its resource efficiency problem, and iconically, Jiang called for the “promotion of harmony between humanity and nature and putting society as a whole onto a development path of production, wealth and environmental-friendliness.”

This led to the development of China’s ambitious Circular Economy Laws and Clean Production Laws. But it is harder to work against the entrenched interests of provincial governments. While promoting clean production and circular economy is keenly focused at the central government’s policy and procedures, provincial leaderships were still evaluated by how much growth were measured and how much production were accounted on the books. This has led to increased protests and social discontent ironically by the same people who benefited by the rapid development and higher standard of living. According to a former chief engineer at the Ministry of Environmental Protection, the number of public protests over environmental issues has increased over 29% every year.

To suppress the social discontent, the Chinese government continues to introduce a lexicon of environmental slogans. Speech of officials are now filled with words such as circular economy, green GDP, two-oriented society (resource conserving and environmentally friendly), and building ecological civilizations. They aren’t all empty slogans, however; in 2010, businesses and local governments that failed to meet their targets on power saving and emission reduction set in 2006 were forced to shut down or power cut off. Some hospitals were forced to operate on generators in order to continue their operations. This reflected the problems of economic development in China: on the one hand, top-level policies are strongly enforced to meet the rising environmental and social costs; while on the other, economic development must continue to bring more people out of poverty. This, in fact, is at the core of China’s environmental problems: that it is not a business focused solution, rather it is a political one. Delivering cheap food and products to the massive population and maintaining stability is the key to China’s policies and adding social and environmental costs to products sold to its citizens will challenge the pace of political change in radical ways.

There is another side of this problem: given China’s serious enforcement issues at the business level, product safety invariably linked to environmental issues challenges the rising standard of living. While the Chinese people are now able to afford things they could not have imagined twenty years ago, but domestically produced food and other products are deemed unsafe and not worth the novelty they inspire. Recent stories of tainted baby formulas remind the Chinese people and the rest of the world that China’s brand is separated from its slogans. While the governing body calls for harmonious existence between man and nature, the business leaders charged with that task disharmoniously dialogue between their own pockets and their rising prestige. They are seen as capitalists yet they maintain the worst form of capitalism—exploitation for the benefit of their own selfish needs. With this, the Chinese brand suffers. Made in China is a joke now days and a point of contention not only in China but the rest of the world as well. China's brand cannot be separated from its true self—it is determined by what is done in its name for and by its people. By simply touting slogans and enforcing nominally as political solutions to an economic balancing problem vested in the art of sustainability, China is destroying any chances it has to become a force in the global community. As many economists pointed out in the recent World Economic Forum in Dalian, rebranding China is a key discussion that must take place, but what brand would suit China’s reinvented world role?

“Will its inspiring commitment to a harmonious, "ecological civilisation" – underpinned by policy, finance, the rule of law and a growing community of innovative and responsible businesses – mature into a trusted, global brand? Or will its profile as an economic and military giant, powered by an environmentally bankrupt and increasingly unequal society, come to dominate China's reputation?”

Richard Edelman, creator of the annual Edelman Trust Index, pointed out the fact that China was known more for its government's actions than its business community. I think Edelman is right in the sense that China’s paradoxical development problem is addressed at the political level and has not yet filtered to the business mentalities. The balancing of economic, social, and environmental costs to the government is about stability and short term planning; but to the business community, it should be about long term projection and shifting the responsibility of development from the few provincial leaders to the Chinese businesses with vested interests on the world stage. Long term survivability of the Chinese brand ought to be the focus, not the long term prospects of few political leaders. So the incentive should not be simply growing the GDP; rather the incentive is in preserving the Chinese national identity and shoring up on the world stage as a nation open for business with evolving rules grounded with a traditional sense of social responsibility. 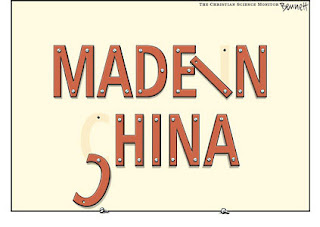 China’s recent plans to curb its coal consumption are admirable; but at the heart of the problem is a trust issue. China needs to recognize that balancing economic, social and environmental costs for its growth is not only a political problem but a business one. In the sense that it is a business problem, long term sustainability will have to come from merging China’s true self with what is done in its name, for and by its people, businesses and government alike. Mere empty slogans will not alleviate the root cause and mere regulatory enforcement is not the solution. The Chinese business community and its people must take responsibility and recognize that the image of China and its economic, social and environmental interests are inextricably connected. The nation must set its course and the people must trust in that course to aspire to do the right
thing.