(This story is not about sustainability, but it's a story I wanted to tell for some times now. Enjoy)

There is a hill to climb in Cincinnati. In the winter of 1992, I had to walk up that hill to get to the place where other kids waited for the school bus.

I had never been on a school bus before. In Beijing, I had always walked to school. Each morning, I would walk the familiar path and I ran my finger against the gritty textures of building walls, rusted iron fences, and rhythmic tree barks. I love the feel of different textures on my finger tip. I can’t remember why I love it. Maybe it was because no one walked with me and the textures spoke to me.

I came to America in 1992. The first day of my school I had to climb a hill to get to the bus station. It was dark and early in the morning. There were no walls to drag my finger across, no trees to bark my skin. There were some fences but they were monotonic and boring. I did not understand them.

I climbed and dragged my feet along the side walk. No texture, just gravity.

I got to the top and there were a few kids already there. They were foreign to me but in the dark they didn’t look all that different. You can’t see their blue eyes or their blond hair. They were just shadows, strangers I did not want to talk to.

The bus pulled up a few minutes later. It was a strange thing—yellow with black stripes. There was a red sign that extended from its other side as it pulled slowly into the intersection where it stopped. A slim bar rotated from the front of the bus into the other side of the road. Cars stopped.

The door opened. I was the last to get on.

I walked towards the end of the bus. Surely, no one would talk to me back here; or so I thought.

Back in China, everyone sat in the front of the public buses when there was room. The school bus was almost empty when I got on, so I felt sitting in the back was the safest thing to do.

The bus ran through unimaginable neighborhoods. Houses clustered not like the apartments I was accustomed to. They were different shapes, different colors; some had fences and some had none. How can Americans be so un-uniformed?

Slowly the bus filled. Kids piled together in quite laughter and chatter.

What if someone asked me a question?

My luck ran out as we stopped one last time. A group of kids squeezed through the narrow walk path in between the seats. They were coming towards me. I was worried. I looked up to plead that they leave me to my space. A girl made eye contact. She was about my age. I don’t remember if she had blue eyes or brown hair, or was it the other way around?

She sat next to me. She smiled. Strange noises came out of her mouth.

She stared at me. I realized she was talking to me, just not in Chinese, that’s all.

Why can’t Americans take a cue?

I turned to face the bus window. It was rude, I know. But I didn’t know what else I could do. Obviously she did not take my cue for wanting to be left alone. In China I would’ve loved if someone had talked to me on my way to school. But this is America. My wishes were just the opposite.

I stared into the darkness beyond the bus window. Sparkles of light came from houses and street lamps. I saw my reflection drag itself across those sparkles. I saw the girl next to me behind me in the reflection of that window. Our eyes met again, in darkness and in reflection. 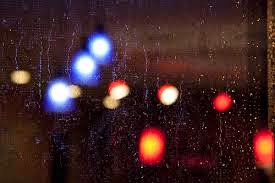 I no English and there was a hill to climb each day. That was the easy part. The hard part was figuring out how I would keep the space next to me empty on those long bus routes.