Coveted Sustainability - Part Zero, the Ebb and Flow of a Beginning in Art.

(My wife is looking to write a press release about a local "coveted sustainability" event. The idea intrigued me. It had reminded me of my days wondering aimlessly studying aesthetics. What followed is a rant and ramble of my usual best or worst depending who you are and how you see me. Cheers.)

Something in the art guides us, imagines us to be its voice, directs us to feel a certain way in the ebb and flow of time as it forever flows.

Art by itself has no inherent meaning or cultural significance without the audience’s emotional reaction. Often, that emotional reaction is primed by certain political and economic functions. There is rarely a linear casual connection between the art itself and the social and political factors without the audience asking the direct and interpretative questions about its meaning and significance in which the audience finds context for the expression of emotion.

That is, my friends, the beauty of being aware of our emotions and introspects in art isn’t it?

The mere fact that we are aware of art invokes something in us that says—yes, I do exist and it is recognized in this object the artist has successfully created to relate to my own existence. I do not live in a void of imagination where reality is obscure. This world of mine is real, and this world of the artist justifies my existence.

Art, then, is the ultimate judge, jury, and executioner of our being on a metaphysical level, isn’t it?

Yet as members of capitalist society in all forms (libertarian or communitarian alike), we are only politically and economically engaged in art itself through the delusion of recognizing our emotions. The mainstream “art”, under the condition of capital effectiveness, works out its own internal contradictions that society can no longer ignore—our existence, the existence of Art itself, no longer finds the ebb and flow of time as it flows for some meaning or purpose. Rather, it is defined by what is arbitrarily defined as “beautiful” and valuable. By the mere fact of valuing art for its political or economic message, emblematic of our consumption behavior patterns, we covet art for its namesake. Art in this modern age, as sustainably as art has been for the last few thousand years, resemble its truth in the illusions of something more or less ambiguous—only a shadow of existence.

So we covet art in its mere reflection of who we are—the empty, soul-less, choice driven, cocktail party attending, pontificating, deconstructive, rational being that we are.

And we forget, ART, as it was intended to be and justly reminds us in troubled and emotional times, is coveted as forever becoming something more than our mere existence. ART is in part introspection, but in part a direct line of communication between our introspection with the grander existence of a human condition.

Through ART, our souls speak to each other and we find reasons to live a century more to perpetuate something truly amazing. What it is that we are prepetuating, however, must be first decided by each of us . . . 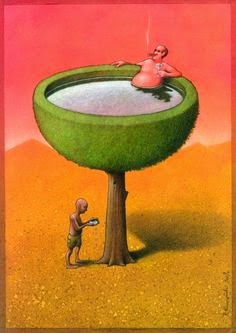 Ebb and Flow,
That's the way the river goes.
Water for the rich,
Art for the poor,
Wealth well distributed and
Death reborn.
You look up, and I look down;
I look up, and you look down.
What do we see?
What do we hear?

Never eachother.
Because we are too busy,
Glorified busy.
Figuring out what it is that we live for.